“Every project is unique, its path shaped by dozens of evolving circumstances and preferences. When a project is rare enough to have a rug custom made from scratch, it takes time to plan and lay out all the details. But where does it begin? How does such a project come together? It all starts with a phone call.

Mrs. W called in the middle of a blistering hot summer day, cheery yet frustrated, to inquire if Atiyeh Bros. made custom rugs. See, she had rugs that were made for her 20 years ago by a fabrication company that is no longer in business, and she wanted a larger rug to match her set. After calling more than half a dozen current retailers, she found a ray of light in Atiyeh Bros. and Greg Morris-White’s 25 years of rug fabrication experience.

Mrs. W’s original rug designs were simple enough—a base solid color with four to five “waves” of changing colors running through. But even the simple becomes impossible if one does not know how to manage such a prestigious task. Fortunately, Greg and his team together have years of experience in making custom rugs.

The first step was to see the original set in person to assess exactly what the project would require. The two original rugs are 8 x 9 with similar but slightly varied designs. Greg and Mrs. W decided to match the design of one of the rugs exactly but render it in different colors. Originally, the color scheme was waves that change colors midway through: from blue to purple, or from green to blue. Instead, Atiyeh Bros. was to make all the waves solid colors and incorporate white instead of purple.

Because the original rugs were custom made, there was no pre-existing pattern to work from, so a digital layout had to be created. After checking to see if the computer program world had produced anything new for creating vector images, Greg determined that the best fit for the purpose was a program he had used many times before: Adobe Illustrator. It took nine hours to build a vector image of the rug design with the program.

Using photos taken of the rug, the most imperative part of the design to duplicate was the seemingly random curves of the waves. Each inch had to be exact to properly reproduce the look of a sea frozen in an instant—waiting patiently to resume its flowing nature, its constant motion. 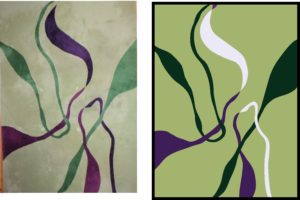 Once the team had a vector image of the rug, the design had to be projected onto a wall in order to draw it out onto large sheets of construction paper. The team needed to draw a full-scale 9 x 12 and leave a full foot border around the design; this required an 18- x 30-foot section of bare wall, an hour of adjusting the projector settings, and waiting for the perfect cloudy Oregon day to cast the brightest image.

All the waves were first defined with thousands of small black dots, then the sections were labeled by color, section intersections were marked, and the entire border was outlined and measured to make sure the edges were the correct size and perfectly squared. The work was then double-checked, compared with the vector image to make sure every part was labeled correctly, and then pulled from the wall. Once on the floor the whole rug layout could be truly seen for the first time in a new perspective: not just an idea or an image on the computer, but a real piece of art forming before our eyes.

All the black dots were connected with pencil markers to further clarify the areas where all the straight lines go and where every curve should be. The excess paper was cut so all that was left was the layout in its exact 9 x 12 size. Then it was time for the next crucial, time-consuming, nearly impossible task: making the same thing—but with broadloom carpeting.”